In a recent post online, the makers of Episode VII have revealed the names of the characters featured inn the recent teaser – in a cool feature they were posted up in the style of trading cards

First we have BB-8, the eye-catching droid we’re all still figuring out how it works. In a recent interview Mark Hamill said that this isn’t a CG model but a physical prop!!

The next name we have is Poe Dameron, an X-wing pilot. The cards also confirm that X-wings, TIE fighters, Stormtroopers and the Millennium Falcon are still called just that

So Kylo Ren is our mysterious crossguard ‘saber wielding baddie – no other confirmation other than that Kylo is a ‘he’. 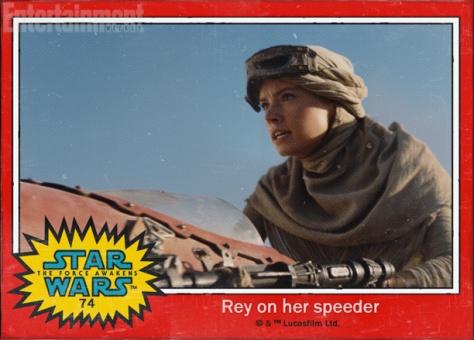 So the girl on the speeder is Rey, not Kira as the rumour mill assured us.

And lastly we have Finn our pop-up stormtrooper. No last name for him or Rey, don’t know if it matters or not. ‘On the run’ seems interesting, one rumour is that he’s a defector – ‘course there’s plenty of stuff to be on the run from on Tatooine, even for a stormie.