This is a new set of posts detailing things I’ve found or learned more about in the real world from watching great Sci-Fi or playing video games. Feel free to take joy in the knowledge I impart or, more likely, scoff at my ignorance of the world. 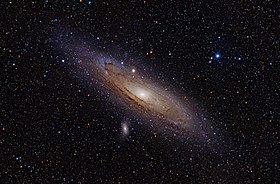 I learned about this in:

Now before you get on your high horse – of course I’d heard of the Andromeda Galaxy before, but watching the trailer for the Mass Effect game and the setting of a new galaxy got me excited and made me wonder what was there to know about this galaxy. Obviously there’s tons – but here’s what caught my eye.

First of all, as galaxies are, it’s huge! It contains about a trillion stars, about twice the number in our galaxy, and is around 200,000 light years across in width. It is named after the Andromeda Constellation, which in turn is named after the mythological princess Andromeda, who was given as a sacrifice to the gods after her mother boasted she was the most beautiful being in the world, before being rescued by Perseus.

The thing I wanted to know most was why Andromeda – I assumed it was because it was the closest, to which the answer was both yes and no.

This is a diagram of what is called the Local Group of galaxies, how anyone works and maps this out is beyond me and my hat is well and truly off to all astronomers everywhere. There are in fact several galaxies close to ours, but none anywhere near the scale of the Milky Way, though much further by distance Andromeda is the nearest major galaxy and the only one of comparable size in the Local Group

So that explains the setting. Scientists also believe the Andromeda galaxy will collide with the Milky Way in 3.75 billion years. I wonder if this has any bearing on your mission in the new game?!

That is all, I hope you feel as educated as I do!

343 have released the opening clip from Halo 5 for our viewing pleasure and it really has made Halo exciting.

We get a few tidbits of information. Infinity, Lasky and Palmer are still key players in the story by the looks of things. Halsey seems to have turned her back on the Covenant, but what she’s done to make the UNSC remove the deathmark on her head we’ll have to see.

The battle scene was awesome, with some cool new Covenant ships glimpsed briefly. My only concern is that I’ll go from that awesome scene of how Spartan’s fight to my gameplay, stumbling around the battlefield getting killed over and over – might ruin the effect a bit!!