With the new Christmas special imminent I thought I’d try do a quick catch-up on the aliens from the last series.

At first the Quantum Shade seemed cool and a good plot device but when you over think it it starts to look dumb. Why would a creature exist just to silently execute people, and if it can pair with you and track you anywhere why give such a ridiculously long countdown?

A Quantum Shade paired with it’s victims, capable of finding them anywhere in the universe and instantly killing any of its victims when their time was up.

I thought this race was quite original – OK they’re based on the two-headed god called Janus- but they’re a bit unusual even for Doctor Who! The second head telling the future was an interesting feature.

Janus are two-headed humanoid beings, with their second head facing backwards and able to see into the future. Because of this ability they were often exploited. 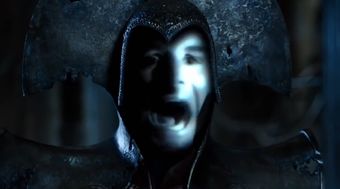 I honestly can’t remember these, it’s been such a ridiculously long time – they were creepy…I think!

Cloister Wraiths are semi-sentient constructs containing the minds of deceased Time Lords and others who enter their domain.

In the fun Christmas special we also got this guy, I liked the touch about his kids eating the mother, probably supposed to make him seem evil but it seems accurate for an insectoid race.