As with the last entry in the Saga Vanity Fair have done a spread on the new movie releasing new images and teasing details in interviews with cast and crew. 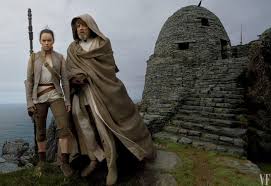 We get teased a bit of detail aboutuke and Rey, but the main bit of information released was that Luke is not alone on Ach-To. There is also an indigenous race on the planet that serve as caretakers of the Jedi Temple there.

The piece has some extremely poignant images of Carrie Fisher, both with Mark Hamill and her daughter who plays a Resistance fighter. The interview reveals that Leia will have an expanded role in this movie and that Episode IX would have moved her to front and centre the way Han was in 7 and Luke will be in 8. They have also categorically ruled out using CGI to portray Leia meaning there must be a heavily adapted story for the next installment.

The rest of the Resistance crew are looking fierce. We don’t find out much about Poe, but John Boyega revealed that Finn is wearing a Bacta Suit (presumably a more mobile version of a Bacta tank) in the trailer. Finn will go undercover with new character Rose, a Resistance technician. It was also revealed that Rose has a sister named Paige who is a gunner and is in a scene with Poe.

Next we get two images of the inhabitants of Canto Bight a city for the rich and powerful. It is also described as where Finn and Rose go ‘behind enemy lines’ so it could be in First Order territory which could be interesting, maybe all the white and black dress code is meant to evoke stormtroopers? Lucasfilm were quick to point out that the character in the back is not a Bothan, but seriously then why go to the effort of making a creature that looks almost exactly like a Bothan. That said I love the little dude in the front with Neal Scanlan – I love the complete variety you get in Star Wars.

A few more Patrons and aliens in this one too.

We got some confirmation on new characters too. Laura Dern plays Vice Admiral Amilyn Holdo. Holdo is referred to as being part of the Resistance but my guess is she’s Republic military who have now joined the Resistance. Something about this image coupled with the Casino ones gives me a very Hunger Games feel to all this but it still works and I like the idea of an opulent Republic character being forced to work with mucky Resistance fighters. I also get the feeling she and Leia will butt heads during the film.

Is it an Ezra…is it a Thrawn…no it’s erm, DJ…who technically doesn’t actually have a name. Described only as a ‘shifty character’ one of the prevailing theories is that DJ stands for Dark Jedi. It could of course mean any number of things – maybe he plays 80’s songs at weddings – but I do like the idea of a force-user who’s just out for personal gain, he could be almost a darker version of Maz.

Lastly we get our villains. Kylo Ren is discovering that ‘patricide isn’t all it’s cracked up to be’ and is scarred both internally and externally.  Phasma is looking cool unmasked and with a new staff that has ‘personal significance’ for her (a tie-in comic and novel may reveal more). Hux seems the least changed and I like that.