These exotic creatures were able to connect to the mycelial network of spores scattered across space and as such could connect to the experimental Spore Drive on the USS Discovery and perform as a navigator. When released to space the creature was able to jump through space independently. 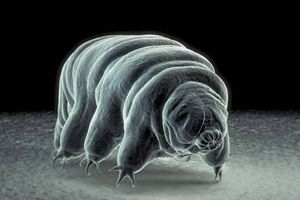 They were named as such because of their likeness in both characteristics and appearance to the microbial creatures of the same name found on Earth. They are incredibly resilient, shrugging off phaser fire and melee weapons and inflicting massive damage when threatened.

I’m slowly making my way through Star Trek: Discovery and I’m enjoying the mix of aliens they’ve got and the commitment to effects on background as well as key characters. The plotline with the Tardigrade was fun and I’d like to see Ripper and more of his kind make another appearance (for all I know they do, but I s’pose I’ll find out!)